Planetary magic is an important vehicle for the development of any magician. Planetary energies have an impact on the personality of the magician. These energies that influence you can also influence others. Therefore, it makes occult sense that you learn how to flow with and eventually manipulate these tides. You can bring out the positive aspects of your own astrological makeup, overcome the negative influences of the planets in a given day and generally live in harmony with the cosmos as you flow with the light and spirits of the stars. It is easy to focus, as do many magicians today, on the elements within nature as the central pillar of your magical success and on spirit evocation. For sure, these are important areas, but planetary magic is the backbone of success in many of these operations as well. Let us imagine a particular scenario. Let us say you want to communicate with your boss at work on an important issue and you would like to get his agreement. For some reason or another, you doubt this meeting will go well. You can do general spell casting magic, as most magicians would, to make sure your intent comes to pass. You can also stray into a shady area of magic by sending out Air spirits to influence your boss’s mind or try to bind him. The alternative is to simply invoke into you the rouhaniat (prana) of Mercury and Venus, the planet of communication and the planet of desire and attraction, to improve your own charisma and communication skills for the meeting. This will result in better success and doesn’t really attempt to control another person’s own decision making or will. Better still, this improved benefit will continue with you for a long time, because it is your own skill that has developed. This is personal growth at the highest level. The importance of planetary magic hadn’t escaped the awareness of the ancient magicians, who made it the bedrock of their spiritual practices. Historically, the word Chaldean has become synonymous with astrologers as much as magicians. The Sabians of Harran built seven planetary temples to their various divinities since astrological magic was central to their faith. The number seven is also part of the mysteries of the ancient Queen of Heaven and Goddess of Love. In the epic tales, Ishtar descends into seven gates of the underworld to restore the slain shepherd king. The number seven is associated with the star of the Goddess of Love, the planet Venus, and seven by seven equals the forty-nine petals of the Rose of Life.

However, the seven ancient planets are not all planets, by modern astronomical definition, as they include among them the Sun and Moon. The Arabic word for a planet is Kawkab, which is almost identical to the Hebrew word Kokab or Star. The word Kawkab was also used in medieval and ancient Arabic astrological writing when refer- ring to stars. It seems that the ancients viewed these heavenly bodies simply as stars; some were thought of as moving fast and others very slowly. The seven primary stellar bodies of the ancients are Saturn, Jupiter, Mars, Sun, Venus, Mercury and the Moon. This order is known as the Chaldean order.

The ancient magicians viewed each of these planets as alive and emanating a sentient spiritual essence or rouhaniah endowed in it by the Divine. It is the prototype of the Gaia Theory, but extends to all stellar bodies and not just those with eco-systems that support biological life. The ancients believed that this rouhaniah materializes in the form of spirits that can be contacted and lured here into our sphere on Earth. These rouhaniah orbit the planet itself. It is the rays emanating from the rouhaniah that are the cause of astrological influences, rather than the physical bodies of the celestial spheres. In the ancient world, the physical body and the rouhaniah of each planet was believed to be a chariot to one of the gods and goddesses. Some of the ancients even worshipped those planets directly as the gods and goddesses of their realm. The names of the seven planets in English correspond with ancient Roman deities such as Venus, the goddess of love and beauty, and Mercury, the Divine messenger. Similar naming practices occurred in many cultures.

Some among the ancients viewed the planets themselves as gods and goddess, but others saw them more as natural living beings acting on behalf of the Creator. They believed them to be aware enough to be entreated with prayers and addressed humbly. The spirits of their own world would respond directly to the seeker. Even when not taken to the point of worship, the ancient rites included years of devotional service, sacrifices, initiation and an entire life style change to be com- patible with the nature of the planets. Even so, many argued that the planets themselves were agents of the primal creator and shouldn’t be confused with the source. The father of the divinities among the Chaldeans was Anu and Anat and the Milky Way galaxy was known as Tariq Anu or the Pathway of Anu.

An easy way to understand the nature of the planets is to use the example of a kingdom. The Sun is like the king among the planets, with the rest acting as aids and advisors. The Moon is like the minister of state and the keeper of the covenant of the ruler. Mercury is the king’ s scribe. Saturn is the guardian of the vaults and treasury, as well as general over the army and police. Venus is both the queen and the maidens that serve the king. Jupiter is the court’ s judge and master of fortune and finance. Mars is the king’ s executioner and foot soldier.

The two celestial lights are the Sun and the Moon; they have the stron- gest effect on the incidents that occur in the world. The Sun is by far the stronger of the two, and thus the most important of the seven plan- ets. Through observation, it is obvious that its elemental nature is heat and dryness, and its effect is strongest during summer. The sign of Leo is associated with the hottest month in the year. It shares with the Sun its elemental nature, masculinity and the diurnal quality. Ancient astrologers also marked that the Sun was the middle planet in their an- cient order and that Leo is the middle of the Fire signs and the middle of the dry signs. The compatibility between the two and the fact that the heat impact of the Sun increases in Leo made them consider it to be its natural sign.The moon and the sun also share compatibility in eight facets.

First, the moon is also one of the brightest planets visible to the naked eye.

Second, it is the one the most evident planets as far as its effect on our earthly world.

Third, they are similar in their not going straight and then moving backward during their orbit.

Fourth, they are both lights in this world, one by day and the other by night.

Sixth, the ascendant of conjunction and receptivity occurs due to the Sun and the Moon.

Seventh, the Moon receives its own light from the Sun.

Eighth, the largest and most potent of the planets is the Sun, and the Moon is the closest one to us.

The Moon thus becomes a partner of the Sun and its proxy in its influence on this world. It is because of this that the sign of the Moon was placed next to the sign of the Sun. This could have been either Cancer or Virgo. Cancer was considered more suitable, because the moon is cold and moist and feminine. Cancer has these same qualities, while Virgo is cold and dry. The moon also quickly changes from quickness to slowness, from light to darkness and from shape to shape. Cancer is considered a changing or cardinal sign and at its commencement, the season changes from one kind to the next. Astrologers therefore agreed that Cancer is the sign of the Moon.

Astrologers then divided the Zodiacal wheel in half. All the signs from Leo to the end of Capricorn were attributed to the overall domin- ion of the Sun. The signs from the beginning of Aquarius to the end of Cancer were then attributed to the Moon. The solar section was called the great half and the lunar section the minor or lesser half. The two lights’ primary functions are the giving of power and the maintenance of composition and mixtures. The other planets share the signs with the two lights. Thus, each planet has two signs, one from the direction of the Sun and the other from the direction of the Moon.

Saturn is likened to an individual who is intent on destroying the world and thus his signs were placed opposite to those of the two lights. From the lunar half, he was given the sign Aquarius. Aquarius is hot, contrary to the coldness of Cancer, but it also shares its moisture. From the solar half, Saturn got the contrary sign to Leo, or Capricorn. Capricorn is contrary to Leo in that it is cold, but it shares dryness with it.

Venus follows Mars after the Sun and is given the two signs that follow his. From the side of the Sun, she receives Libra and from the side of the Moon, Taurus. With the signs of the two lights, they form an aspect of sixty degrees called a sextile, which is friendly and good. It is not as friendly as a trine, for Libra and Leo are both hot, but one is dry and the other is moist. Hence Venus is called the lesser benefic planet.

This leaves Mercury, who receives from the side of the Sun, Virgo, and from the side of the Moon, Gemini. Leo and Virgo are in harmony in the strongest reactives, which is dryness, and different in actives or heat. Mercury is considered benefic with benefics and malefic with malefics, because his signs are next to the two lights in one state and different in another. One of the Mercurial signs, Gemini, has dual bodies. 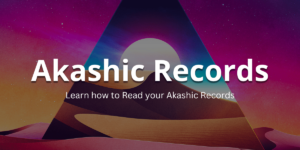 The Complete Guide on: Akashic Records Reading for Beginners